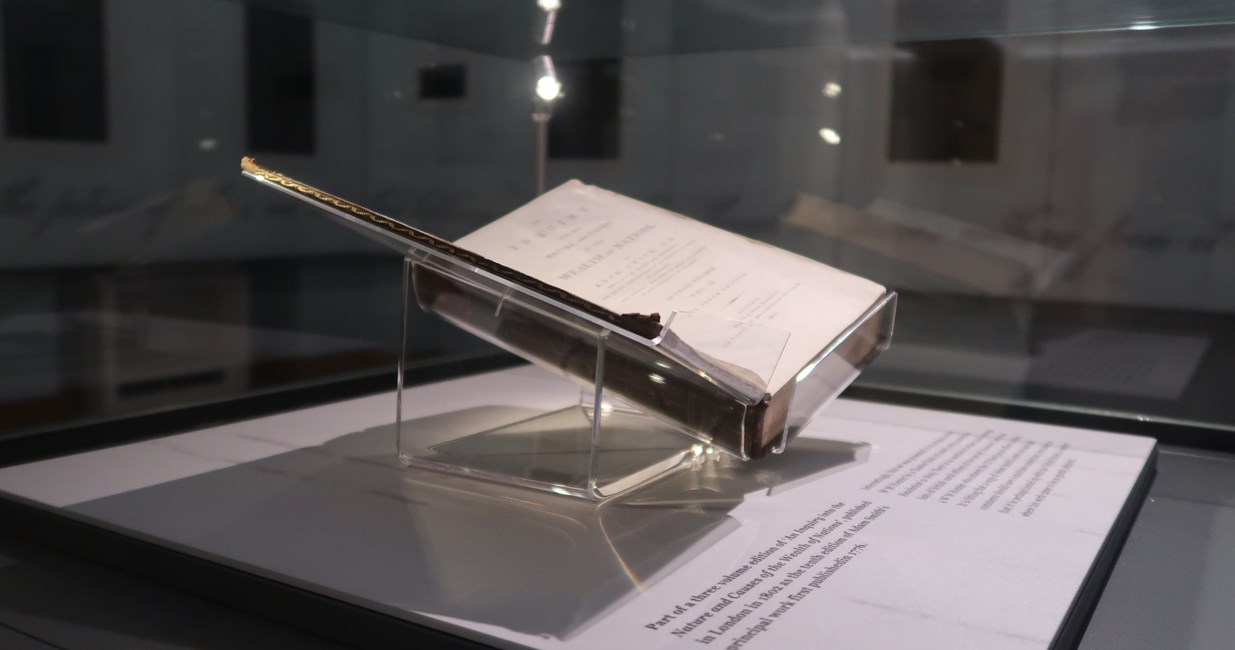 We face another pandemic in 2021 which now requires a moral ‘vaccine’.

Bob Chapman, Chairman and CEO of Barry-Wehmiller and one of the world’s most influential business thinkers, says an epidemic of anxiety and depression in the workplace needs to be fixed – and he knows how we can sort it. Dr Caroline Howitt, Programme Director of Adam Smith’s Panmure House, shares a far-reaching exclusive interview with an inspirational American.

Where will humans find happiness and purpose in the Post-COVID world? It is clear that Bob Chapman, the inspirational American business leader believes he knows the answer. He was able to share his thinking by Zoom interview, where he reflected on a pre-shutdown visit to Adam Smith’s Panmure House in Edinburgh, and how Smith’s Theory of Moral Sentiments resonates with his own inspirational thinking.

Bob Chapman, Chairman and Chief Executive Officer of Barry-Wehmiller, who lives in Aspen, Colorado, is the visionary who says ordinary people now feel that economic greed is out of balance with human dignity.  In 1976, Chapman, who trained as an accountant and joined Barry-Wehmiller in 1969, was catapulted in as chief executive after the then CEO, and his father, died suddenly. It was a struggling company with a $20 million turnover. Through a combination of repositioning, organic growth and the acquisition of over 100 companies in the packaging, corrugating and sheeting industry, Bob and his team built the St-Louis based business to a $3 billion platform of industries with 12,000 team members. Today, each team member is inspired by the unique culture of ‘Truly Human Leadership’, which is expounded in Chapman's best-selling book, Everybody Matters.

Calling out the epidemic of anguish

He poses a very simple question: why do we have such record levels of anxiety and depression among people when we’ve had a prolonged period of peace and prosperity in the both the United States and in Europe?

He says this increasing anxiety is because we don’t know - or have forgotten - how to care for each other in society and we have become a ‘Me’ centric society rather than a ‘We’ centric society.

He calls out this “epidemic of anguish” and the widescale suffering, despite record levels of employment and widespread peace around the world.

“Why? We had everything: we had peace and prosperity, we had a shortage of skilled people, so you could get a good job and you didn’t need to think about sending children off to war – why weren’t people happy? Because we achieved the economic dream right? Of peace and prosperity? But it’s because we never taught our leaders to care. We taught our leaders to use people for economic gain. And what we need desperately is a human revolution.’’

Moreover, he cites as a central issue underlying the problem, being the fact that the workplace causes massive stress on people’s lives. He quotes Professor Jerry Pfeffer, the Stanford Graduate School of Business academic and an expert in organisational behaviour, whose book Dying For A Paycheck, says modern management is harming employee health and therefore business productivity. Pfeffer estimated that 120,000 people each year die of work-related stress. Bob Chapman says that such harm is a result of leadership malpractice. He believes the answers can be found in learning how to become empathetic listeners, and this must start at the top of all types of organisations, both public, private and not-for-profit.

He speaks about the 'Privilege of Leadership' and why leaders must help their people discover and share their gifts. He also believes that building and sustaining a proper human relationship at work will have a bearing on home life too. He maintains that the reason we can’t resolve our difference is that we are talking to each other but do not have the skills to listen.

“In my journey to become a business leader, I was never taught that the way we treat people will affect the way they behave when they go home to their families. I thought business was business, and that whether you are a good mother or a father; that was completely independent and separate.’’

“There is not an ounce of doubt from our experience that when you treat people with respect and dignity, and you give them a sense of safety and value, that they return home to be better parents who are going to model the behaviour.’’

It begs the question, he says, what ability can parents have in building good relationships with their children if all they are doing is talking and not listening. Parenting, he maintains, can be just as broken as management. 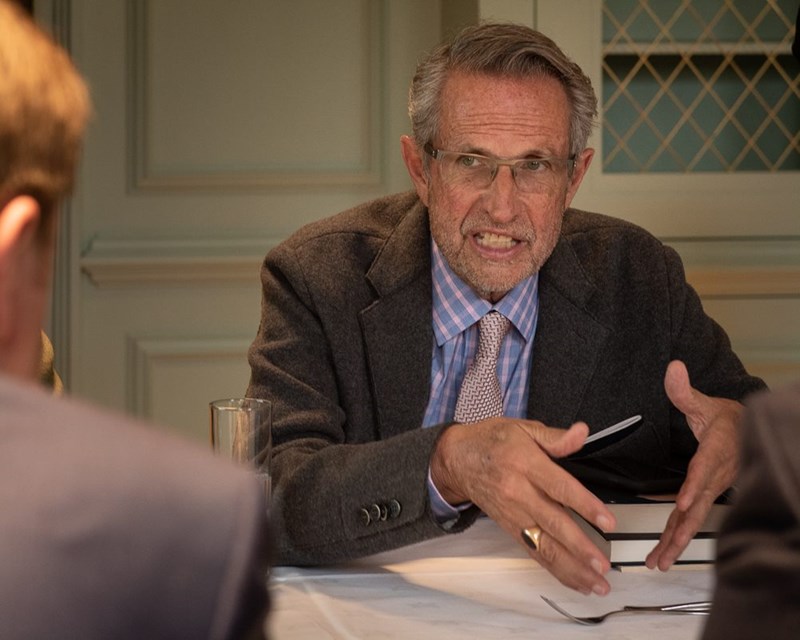 Leaders must be taught how to care

Bob Chapman says that our universities are still out of sync with what they need to do too.

“Our universities have got to have a vision to create leaders in every faction of society, in politics, in business and in education.  I’ve spoken in these factions of society and the pain is everywhere: in education, in healthcare, in the military, in government, in business and in non-profit sectors. Pain is everywhere because leaders have never been taught to care. They have been taught to use people for the goals of the organisation, and if we pay them, that is our obligation to society.”

He argues for the necessity to have benevolent leaders, yet organisations are still hiring people to achieve the goals and see them as a function.

"The revelation in my book if you think back to my journey, is the realisation that people aren’t functions. The receptionists, the accountants, the engineers; they’re someone’s precious child in our care.’’

He points to an opinion poll study: “What Gallup found out when they did a survey in the world for the source of happiness in 155 countries, was that they thought it would be wealth or health that would equate to happiness. But actually it was a good job working with people you enjoy that creates happiness.’’

In 1997, Chapman’s business bought a South Carolina spare parts company for $50 million and instigated a fun competition to sell more parts by giving everyone in a winning weekly team $100 bonus. “Revenue went up by 20 percent and joy went up 1,000 percent! We were doing so much better and I was astounded!”

He found that when spare parts orders came into the business, it was bad news because no-one wanted to answer the time-consuming calls, and convert the order because it wasn’t very stimulating.  Once the business injected more fun, staff were calling people back quicker because they wanted to win the game individually.

As a church-goer attending chapel for an hour once a week, Chapman realised that having staff in situ for 40 hours a week made it 40 times more powerful and, “business could be the most powerful place in the world for good in the world if we simply cared about the people”.

Understanding this gives each organisation a clearer sense of how it can achieve its common purpose.

Later, he was at a wedding ceremony when he realised a father giving away his daughter to her new husband was a precious moment. “I remembered that all 12,000 people who work for me around the world are someone’s precious child, just like that young lady and that young man who simply want to know that who they are and what they do matter. Parents want their child, whether they are 50, 30 or 20, to be who they are intended to be and we have the ability to do that. So that was the day that I realised – and what resonates with most people – is that somebody is always going to be someone’s precious child in our care.’’

Shaping the message of Adam Smith

He says his revelations about business being a 'family' that talks openly, all have resonances with Adam Smith.

“The question is: how do we take Adam Smith’s foundation and build upon that and align it to his thinking, because that would be an interesting thing?’’ He sees clear alignment in Smith’s thought on the power of civil discourse, which was all about listening, and the need for this more than ever in the world.

In discussion with Dr Howitt, he said: “If you see something that totally aligns with Adam Smith’s passion and message, you must try to keep his message alive in the world, to create a more civilised society where people care for each other.”

Speaking about the prospects shared by his work and that of Panmure House, he said: “Now I need to find a way to shape this message and bring it to the world, where it lives well beyond me – like Adam Smith’s message has. We don’t want to study Smith as a story, but to bring his message and make it real.’’ 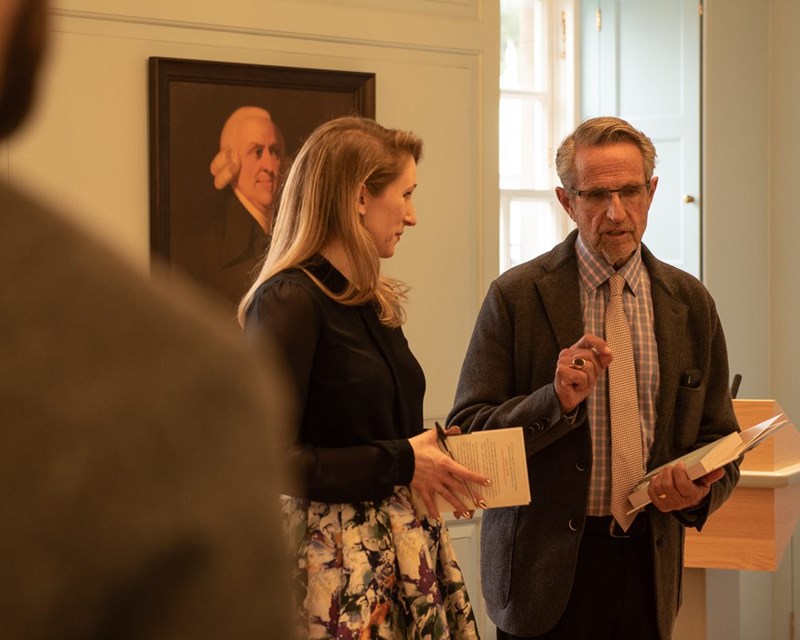 Bob Chapman begins his visit on a tour of Panmure House with Programme Director Dr Caroline Howitt. Adam Smith looks on in the Lecture Room.