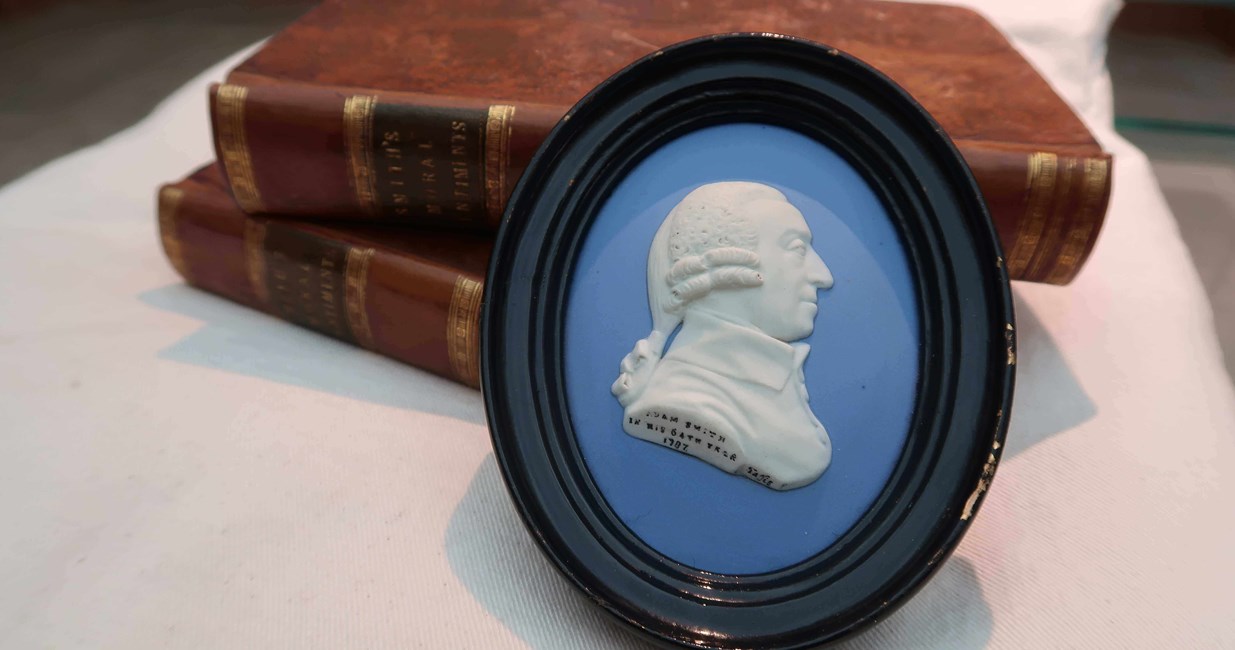 Adam Smith, therefore, deserves his place as a central figure of the Scottish Enlightenment - the extraordinary flowering of intellectual and cultural achievement that contributed so much to the shaping of the modern world.

Originally built in 1691, Smith occupied Panmure House between 1778 and 1790, during which time he completed the final editions of his master works: The Theory of Moral Sentiments and The Wealth of Nations.  Other great luminaries and thinkers of the Scottish Enlightenment visited Smith regularly at the House across this period.

The Wealth of Nations was first published in 1776.

Adam Smith was born in 1723 in the Fife coastal town of Kirkcaldy. He never knew his father, a lawyer and customs official, who died five months before he was born. Adam was raised by his mother, Margaret Douglas, who came from a local landowning family. She remained a strong influence throughout his life. Though a sickly child, Adam excelled at his books.

Smith died in 1790 and is buried in the nearby Canongate Kirkyard.

Adam Smith is remembered today as the author of An Inquiry into the Natures and Causes of the Wealth of Nations. As a consequence, he is hailed globally as the founder of modern economics. Remarkable though this reputation is, there was more to Adam Smith than a single book.

His importance as a moral philosopher is now far better understood through recent study of The Theory of Moral Sentiments. His other works, on the nature of justice, science and the expressive arts, are also recognised as major contributions to Enlightenment thought.

There is also far more to the man than the selective use of the more contentious passages of The Wealth of Nations might suggest. As his other works show, Smith did not simply believe in the primacy of man’s selfishness or in the purity of free markets. The ideas he explores and the conclusions he draws are far more complex, realistic and humane.

In 1740, Smith gained a Snell scholarship to Balliol College, Oxford.

In 1764, Adam Smith become tutor to the young Duke of Buccleuch who was about to embark on a tour of Europe. The Duke’s stepfather, Charles Townshend, was a leading politician and a great admirer of Smith’s work.

'How selfish soever man may be supposed, there are evidently some principles in his nature, which interest him in the fortune of others, and render their happiness necessary to him, though he derives nothing from it, except the pleasure of seeing it.'

The Theory of Moral Sentiments, Book I, Chapter I

‘No Society can surely be flourishing and happy, of which the far greater part of the members are poor and miserable.’

THE DIVISION OF LABOUR

‘The greatest improvement in the productive powers of labour, and the greater part of skill, dexterity and judgement with which it is anywhere directed, or applied, seem to have been the effects of the division of labour.’

‘It is not from the benevolence of the butcher, the brewer, or the baker, that we expect our dinner, but from their regard to their own interest. We address ourselves, not to their humanity but to their self-love, and never talk to them of our own necessities but of their advantages.’

THE INDEX OF VALUE

‘Wages, profit, and rent, are the three original sources of all revenue as well as of all exchangeable value. All other revenue is ultimately derived from some one or other of these.’

‘When the price of any commodity is neither more nor less than what is sufficient to pay the rent of the land, the wages of the labour, and the profits of the stock employed in raising, preparing, and bringing it to market, according to their natural rates, the commodity is then sold for what may be called its natural price.’

'But the amount of the metal pieces which circulate in a society can never be equal to the revenue of all its members. As the same guinea which pays the weekly pension of one man to-day, may pay that of another to-morrow, and that of a third the day thereafter, the amount of the metal pieces which annually circulate in any country must always be of much less value than the whole money pensions annually paid with them.....That revenue, therefore, cannot consist in those metal pieces, of which the amount is so much inferior to its value, but in the power of purchasing, in the goods which can successively be bought with them as they circulate from hand to hand.'

In all countries where there is tolerable security, every man of common understanding will endeavour to employ whatever stock he can command in procuring either present enjoyment or future profit.

Though the manufacturer has his wages advanced to him by his master, he, in reality, costs him no expence, the value of those wages being generally restored, together with a profit, in the improved value of the subject upon which his labour is bestowed. But the maintenance of a menial servant never is restored. A man grows rich by employing a multitude of manufacturers: he grows poor by maintaining a multitude of menial servants.

Whatever part of his stock a man employs as a capital, he always expects is to be replaced to him with a profit. He employs it, therefore, in maintaining productive hands only; and after having served in the function of a capital to him, it constitutes a revenue to them.

Whatever, therefore, we may imagine the real wealth and revenue of a country to consist in, whether in the value of the annual produce of its land and labour, as plain reason seems to dictate; or in the quantity of the precious metals which circulate within it, as vulgar prejudices suppose; in either view of the matter, every prodigal appears to be a public enemy, and every frugal man a public benefactor.

The person who employs his stock in maintaining labour, necessarily wishes to employ it in such a manner as to produce as great a quantity of work as possible. He endeavours, therefore, both to make among his workmen the most proper distribution of employment, and to furnish them with the best machines which he can either invent or afford to purchase.

Whatever a person saves from his revenue he adds to his capital, and either employs it himself in maintaining an additional number of productive hands, or enables some other person to do so, by lending it to him for an interest, that is, for a share of the profits. As the capital of an individual can be increased only by what he saves from his annual revenue or his annual gains, so the capital of a society, which is the same with that of all the individuals who compose it, can be increased only in the same manner.

By what a frugal man annually saves, he not only affords maintenance to an additional number of productive hands, for that or the ensuing year, but, like the founder of a public workhouse, he establishes as it were a perpetual fund for the maintenance of an equal number in all times to come.