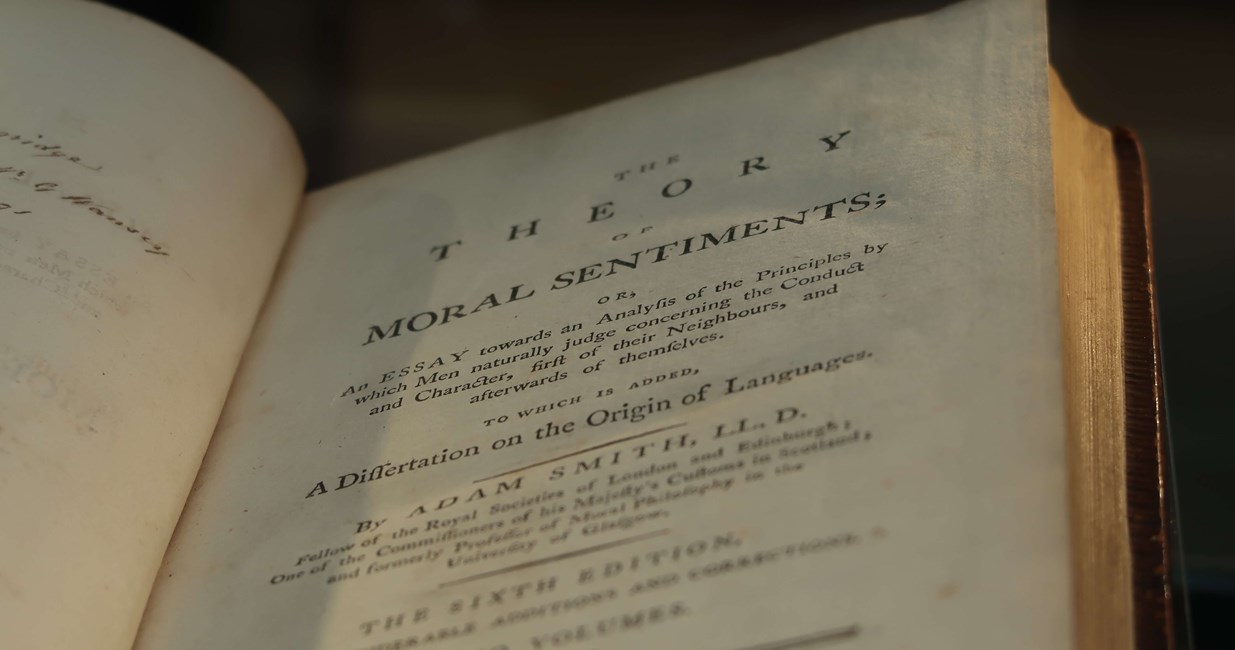 Introduction to The Theory of Moral Sentiments

This was Adam Smith’s first major published work. It appeared in 1759, based on lectures he gave at Glasgow University following his appointment as Professor of Moral Philosophy in 1752.

Smith argues that morality is not driven by some innate moral sense, as was claimed by his old teacher Francis Hutchison, but by humanity’s natural sociability – the need for approval from our peers. We behave to one another in ways that allow us to get along together, but this does not stem from a rational calculation to gain personal advantage. Instead, our responses are driven by our emotions, the principal of which is our capacity for empathy.

This is then reflected back upon ourselves through Smith’s device of the ‘impartial spectator’ – we want to see ourselves as others see us. We imagine how a disinterested stranger would view our actions and adjust our behaviour accordingly. This shapes rules, or ‘virtues’, which Smith classifies as justice, prudence and self-command.

The interaction of these moral sentiments are what makes society function, rather like the workings of a watch.

Smith also introduces his famous idea of the ‘invisible hand’. He suggests that the unintended consequences of our self-regarding actions create social institutions that allow society to function smoothly.

The wheels of the watch are all admirably adjusted to the end for which it was made, the pointing of the hour. All their various motions conspire in the nicest manner to produce this effect. If they are endowed with a desire and intention to produce it, they could not do it better. Yet we never ascribe any such desire or intention to them, but to the watch-maker, and we know that they are put into motion by a spring, which intends the effect it produces as little as they do.

Every man is, no doubt, by nature, first and principally recommended to his own care; and as he is fitter to take care of himself, than of any other person, it is fit and right that it should be so. Every man, therefore, is much more deeply interested in whatever immediately concerns himself, than in what concerns any other man.

How selfish soever man may be supposed, there are evidently some principles in his nature, which interest him in the fortune of others, and render their happiness necessary to him, though he derives nothing from it, except the pleasure of seeing it.

We suppose ourselves the spectators of our own behaviour, and endeavour to imagine what effect it would, in this light, produce upon us. This is the only looking-glass by which we can, in some measure, with the eyes of other people, scrutinize the propriety of our own conduct.

The care of the health, of the fortune, of the rank and reputation of the individual, the objects upon which his comfort and happiness in this life are supposed principally to depend, is considered as the proper business of that virtue which is commonly called prudence.

The very existence of society requires that unmerited and unprovoked malice should be restrained by proper punishments; and consequently, that to inflict these punishments should be regarded as a proper and laudable action.

It is the ornament which embellishes, not the foundation which supports the building, and which it was, therefore, sufficient to recommend, but by no means necessary to impose.

The man of real constancy and firmness, the wise and just man who has been thoroughly bred in the great school of self-command, in the bustle and business of the world, exposed, perhaps, to the violence and injustice of faction, and to the hardships and hazards of war, maintains this control of his passive feelings upon all occasions.....In success and in disappointment, in prosperity and in adversity, before friends and before enemies, he has often been under the necessity of supporting this manhood. He has never dared to forget for one moment the judgment which the impartial spectator would pass upon his sentiments and conduct.

Concern for our own happiness recommends to us the virtue of prudence; concern for that of other people, the virtues of justice and beneficence—of which the one restrains us from hurting, the other prompts us to promote that happiness.

The rich only select from the heap what is most precious and agreeable. They consume little more than the poor; and in spite of their natural selfishness and rapacity, though they mean only their own conveniency,....they divide with the poor the produce of all their improvements. They are led by an invisible hand to make nearly the same distribution of the necessaries of life which would have been made had the earth been divided into equal portions among all its inhabitants; and thus, without intending it, without knowing it, advance the interest of the society, and afford means to the multiplication of the species.